There isn't a better place than Miami in February with our glorious weather which offer plenty of opportunities to get outdoors and enjoy the cooler and drier temperatures, yes, our winter is perfect beach weather!

February in Miami packs an exciting roster of top signature events celebrating the best in art, food and boating. The Coconut Grove Art Festival, the Miami Boat Show and the South Beach Wine and Food Festival are back with full programs and so are the usual vast array of concert and sport events. Andrea Bocelli, Bruce Springsteen, Rod Stewart are in town this month!

The concert and entertainment scene in February 2023 features:

Specially for kids and families This February 2023: The latest and greatest in Boating, Fishing, Sailing, Diving... When? February 18 - 20, 2023
Where? Streets of Coconut Grove. The Festival runs along McFarlane Road, South Bayshore Drive and Pan American Drive.
How Much?: $20 (early bird) $25 at the door Art Wynwood is back on President's Day weekend and continues to showcase a dynamic array of works completely reflective of the original Wynwood District cutting edge and dynamic environment.

Emerging talent from the contemporary art scene as well as blue chip modern masters will be featured.

When? February 16 - 19, 2023
Where? Art Wynwood Pavillion on Biscayne Bay at One Herald Plaza @ NE 14th Street in Downtown Miami on Biscayne Bay between the Venetian and MacArthur Causeways. Convenient with the Metromover, use the Arsht Center stop which is only a block away.
How Much?: One day fair pass $36.50, Multi-day $65, Students 12-18 $25, Seniors $25 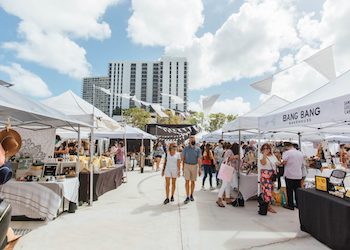 Markets for Makers is BACK in Miami just in time for Valentine's Day. With a new outdoor location at Jungle Plaza, come discover and support 90+ makers and fill your free tote with goods from small businesses! Markets for Makers are known for bringing together independent artists + makers specializing in home decor, fashion, art, design, food (and more!) in a fun + inspiring environment that champions connections. This long weekend affair of glorious food, famous chefs, flowing champagne, or wine... or beer... will be attracting its share of foodies to one of the most spectacular places to be in February, gorgeous South Beach.

The festival consists of several events, some private, some open to the trade only, and many many more open to the public for all of our enjoyment. What kind of events? Brunches, Cocktail Parties, Seminars, Dinners, Burger Bashes, Wine Tastings, VIP galas... you name it, and of course the Grand Tasting Village set up in tents along 13th Street and Ocean Drive.

When? February 23 - 26, 2023
Where? Events take place at many different venues, mostly in the South Beach area, some of the regulars: the Fountainbleau, the Ritz Carlton, the Delano...
How Much? Varies, Grand Tasting Village $265, Burger Bash $275, Wine/Beer Seminars from $85... Join in at the South Miami Rotary Art Festival, an annual, two-day outdoor art festival held in the charming and vibrant downtown area of South Miami. The show offers a weekend of exhibition by 150 local and national artists, an expanded food court and beer garden, and live jazz perfomances onstage.

The event is always family and dog friendly. Come and celebrate your local and national arts community! All profits used by the Rotary Club of South Miami to fund scholarships and local community projects. Chinese New Year is the largest festival in the Asian community calendar which this year welcomes the Year of the Rabbit.

Lion Dances and parades are hosted by restaurants and martial art schools throughout the city. Other festivals, spiritual activities and cultural demonstrations are sponsored throughout the first two weeks of the new year.

What can you expect? Lion Dances, tai chi demonstrations, calligraphy, face painting, acrobatics, arts and crafts, bounce houses ans slides, and of course, lots of food and the Dragon Parade.

Concert and Entertainment Highlights This February 2023

Take an awe-inspiring journey into the incomparable universe of Van Gogh, one of the greatest artistic geniuses of the 19th century. Explore his life, his work, and his secrets as never before through cutting-edge 360-degree digital projections, a one-of-a-kind VR experience, and a uniquely atmospheric light and sound show.

Become completely immersed in the works of art around you, and feel the shift in reality as you dive deep into the world created by Van Gogh's brush strokes. This concert series known simply as "Candlelight" which have had tremendous success around the world has arrived in Miami! Listening to classical or jazz or contemporary music in an intimate and atmospheric setting of a candlelit concert is a delightful and magical experience.
These enchanting concerts feature a wide variety of genres, from Vivaldi and Tchaikovsky, operas and Broadway, to Frank Sinatra, Taylor Swift, Adele, Fleetwood Mac, ABBA... all played by talented musicians at a variety of gorgeous and unique indoor and outdoor venues.
Coming soon:

Beauty and The Beast The "Tale As Old As Time" is reimagined in Area Stage Company's immersive production of Disney's Beauty and the Beast!

Area Stage Company is excited to invite you and your family into the enchanted world of Broadway classic Disney's Beauty and the Beast. Every year a whole new generation discovers the magic behind the castle walls, and now you can be our guest at the Arsht Center for an immersive theatrical experience!

Where?: Carnival Studio Theater at the Adrienne Arsht Center The concert features songs from Bocelli's wide-ranging repertoire, ranging from early fan favorites to his latest full-length studio album Believe, as well as a selection of arias, his beloved crossover hits, and famed love songs. CHICAGO is back in town and is still the one musical with everything that makes Broadway shimmy-shake: a universal tale of fame, fortune, and all that jazz, with one show stopping song after another and the most astonishing dancing you've ever seen.

Set amidst the razzle-dazzle decadence of the 1920s, CHICAGO is the story of Roxie Hart, a housewife and nightclub dancer who maliciously murders her on-the-side lover...

Where?: Au-Rene Theater at the Broward Center for the Performing Arts The Broadway sensation WICKED looks at what happened in the Land of Oz... but from a different angle. Long before Dorothy arrives, there is another young woman, born with emerald-green skin, who is smart, fiery, misunderstood, and possessing an extraordinary talent. When she meets a bubbly blonde who is exceptionally popular, their initial rivalry turns into the unlikeliest of friendships... until the world decides to call one "good," and the other one "wicked."

Where?: Ziff Opera House at the Adrienne Arsht Center There's more to the candle-lit dinner, the chocolates and the flowers... No matter what your budget, there are certainly many options to make this day extra special.

From a stroll on the beach to some over-the-top (literally) escapades, here are some ideas to ponder:

Here's more on Valentine's Day in Miami and Romantic Getaways in the city.

This is a public holiday celebrated every year on the 3rd Monday in February. The observed federal holiday is actually called George Washington's Birthday. Certain states, however, list the holiday as Presidents' Day. The following will be

Here's what's going on this President's Day Weekend in Miami.

For Miami Sports Fans This February 2023 When? See Home Game Schedule below
Where? FTX Arena
How Much? As low as $15, but they go quick! When? See schedule below
Where? FLA Live Arena, Sunrise
How Much? As low as $15, but they go quick! Where? DRV PNK Stadium, Ft Lauderdale at 1350 NW 55th St, Fort Lauderdale. Between I-95 and the Turnpike, north of Commercial. Every second Saturday of the month, the Wynwood Art Walk Block Party is one of the most iconic events in the city in this up and coming neighborhood which has been transforming the art scene in Miami.

Wynwood which is best known for its street art and splashy murals puts together a live art show, pop-up shop & gallery experience where you can mingle among the artists and creators, drink in hand, watch as art is being created in front of you and purchase directly from them.

And beyond the fantastic art there's plenty of gourmet food trucks, cocktails, live music and vendors, yes, it's a party!

When? Second Saturday of the month, doors open at noon
Where? The Wynwood Marketplace at 2250 Northwest 2nd Avenue, Miami, FL 33127 at the Wynwood Art District
How Much? FREE! RSVP for a free drink!
More Info: www.wynwoodartwalkblockparty.com Explore the art murals, outdoor art spaces, perhaps a gallery or two, featured exhibitions or the fabulous architecture throughout the Design District with resident experts.

When?: Several Saturdays / Sundays throughout the month, check the calendar of events for details
Where?: Miami Design District
How Much?: FREE These are live classical music performances by the New World Symphony which are projected into a 7,000 square-foot wall at the New World Center for thousands to enjoy in a fantastic outdoor atmosphere.

The concerts are typically on the second or third Saturday of the month and the season runs from October through May.

When? Second or third Saturday of the month These are fantastic oceanside concerts featuring our best local talents. Pack a picnic blanket or lawn chair and come and enjoy a relaxing Sunday among the swaying palm trees and experience the best of arts and culture.

When? Sunday afternoons
Where? Lummus Park Ocean Drive Promenade between 14th Street and 14th Place
How Much? FREE
More Info and program: www.oceandrivearts.com. Many Miami museums regularly offer free admission days, so take advantage and save if you can!

Here are some of the offerings, and be sure to double check for updates or changes with each venue before you head out.

For our Residents, if you have a Miami Dade Library Card, check out the FREE Museum Pass Program where you can get passes to many of the most popular museums and attractions in the city. Passes are good for a family of 4 and can be easily "checked out" with your library card. Passes are first-come-first-served and as you can imagine, some of the most popular ones get snatched as soon as they become available, each library branch gets a limited number of passes for each attraction.

The Museum Pass Program offers free entry to the following: Monthly lineups include a bi-monthly film screening series, a bi-monthly live music series, an art exhibition series and a new play competition, where playwrights can have their new works performed as staged readings in front of live audiences.

Each year FTF produces well over 500 programs, many are FREE and open to the public, some offered for a low nominal fee, in many cases if you are unable to afford a ticket, please call their box office, and they will be happy to reserve up to four (4) free tickets for your party.

When? Various throughout the month
Where? Sandrell Rivers Theater at 6103 NW 7th Ave, Miami FL 33127
How Much? Many FREE or offered for a low fee.
More Info and this month's lineup: Fantasy Theater Factory Shows.