Types of Sea Turtles and How They Nest and Hatch

Beautiful and graceful Sea Turtles are often seen on our coastal waters. It is quite a thrill to encounter one of these charming creatures during a dive or snorkel.

They spend their entire lives in the ocean, with the only exception being when females come out to our shores to lay their eggs. They are quite remarkable creatures, but sadly, all five species found in our shores are either endangered or threatened. It wasn't until recently that sea turtles have come under protection.

There are now a number of Sea Turtle Awareness programs offered by many organizations dedicated to their conservation and I encourage you to check one out to learn more about these beautiful creatures and their many threats.

We recently took part on the one offered by Miami Dade Parks at Crandon Park in Key Biscayne. The kids loved it and we all learned a lot from it, we hope you will too.

Five species of sea turtles are found in Florida:

All five species except for the Loggerhead are federally designated endangered species, the loggerhead sea turtle is considered threatened. The most common turtle found in Florida's coasts. The broad head and powerful jaws are characteristics of the Loggerheads, hence their name.

They have a reddish-brown shell which often you see covered with barnacles and algae.

They feed on shelled critters like clams and crabs. 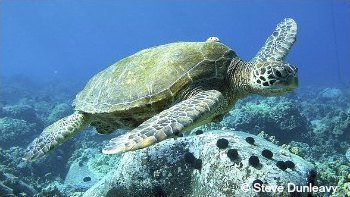 Its name comes from the color of the fat lining the inside of the shell. The shell is oval-shaped without a ridge down the center, the top curves smoothly.

The Green Sea Turtle is omnivorous when young, later in life feed mostly on marine plants. Its snout looks like a hawk's beak and are named for it. On its head it has dark scales with yellow margins. Its shell is heart-shaped with the familiar "tortoise shell" pattern for which it has been harvested mercilessly almost to the point of extinction. Leatherbacks are the largest of all turtles reaching lengths of 6 feet. Males can reach over 2,000 pounds, females are usually under 1,000 pounds.

Unlike other sea turtles, their shells and heads are not covered with scales and rather than a hard shell they are covered by thick "leathery" skin, generally black with light blue or white spots. Kemp's Ridleys have a disk-shaped shell and a gray-green body. It is the smallest of all sea turtles.

They feed on small crabs, shrimp and snails. During the summer months if you visit any of our beaches you are likely to see turtle nests that have been marked by conservation groups and volunteers. Please be mindful by staying away. More on our Sea Turtles...

>>Threats to our endangered sea turtles