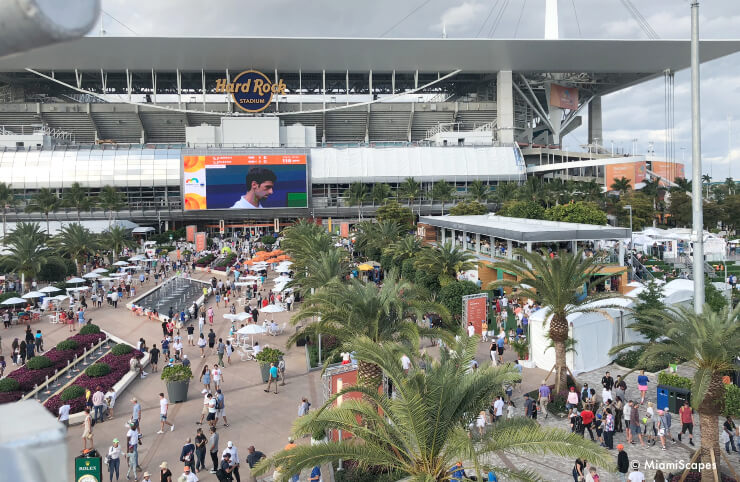 The Miami Open, presented by Itaú is Miami's premier tennis event. Previously known as the Sony Open, this is the place to be this spring... an electrifying two weeks of tennis... delightful weather... celebrity galore... first-rate entertainment events... and it's all back with full attendance at both Stadium Court and the Grandstand Court at Hard Rock Stadium.

The Miami Open is one of the largest tournaments outside the four Grand Slam events.

There is a Day Session and an Evening Session. The Day session starts at 10:00 a.m. and normally four matches are played in the Stadium Court.

The Evening Session starts at 7:00 pm. and two matches are played.

Number of matches played are of course weather-dependent and subject to change.

Qualifying rounds take place the first couple of days of the tournament. You can check what is going on and who is playing whom at the official site www.miamiopen.com.

The atmosphere at the Miami Open is very relaxed. As you wander around the grounds, you will invariably catch a glimpse of some celebrity, NBA star, singer, model, actor or actress and the players in the practice courts. All in a very chilled setting...

Although we miss being close to the surf and sand in Key Biscayne, the move in 2019 to the new facilities at Hard Rock Stadium brought a fresh start with plenty of outstanding amenities for both players and spectators... and did we mention parking? There is lots and lots of it! This world-class venue which recently underwent a tremendous transformation to the tune of $550 million, is equipped with fabulous food and over-the-top facilities to be able to accomodate the tournament in grand style. In addition, beautifully landscaped outdoor spaces offer plenty of room to chill in between matches: a Great Lawn, a food court and Olive Grove space, Spanish Steps with a rooftop deck and beer garden... And of course, there is plenty of food concessions and tents from fine dining to deli sandwiches, pizza, salads, seafood, even food trucks... so you certainly won't go hungry. And you can enjoy it all without missing a beat... you will be able to catch all the excitement going on from the gigantic screen at the South Gate, you can't miss it, it's huge! The main action normally takes place at the Stadium Court. The existing football layout of the 65,000-seat stadium is refitted during the tournament into a smaller cozier structure to house 13,800 spectators. Seating Charts and Finding Tickets for the Miami Open 2023

Considering the glitz and glam overload this event packs, tickets for the Miami Open are quite reasonable, starting as low as $15 for the early qualifying rounds and increasing as the tournament progresses.

Try these recommended sources for finding tickets for the Miami Open to get best available seats at great prices for Stadium Court and Grandstand as well as Ground Passes. Don't forget to apply any discounts and promotions running at the time of your purchase.

What Kind of Ticket Should I buy? Stadium Court vs Grandstand vs Ground Pass

Stadium Court Tickets: There are Day and Night Session tickets available for the Stadium Court matches. This is where Rafael Nadal, Novak Djokovic, Venus Williams and so on are likely to play. Day Sessions start at 10:00-11:00 am and normally there are four matches. The Night Session starts at 7:00-7:30 pm or until all Day Session matches are completed, schedule changes due to weather are common, so be flexible. Two matches are played during the Night Session.

With a Night Session ticket you can enter the Tennis campus at any time before the start of your session, that includes the concessions and facilities other than the main Stadium, so if you want to come earlier and enjoy a nice meal, the entertainment and a couple of cocktails before your session you can do so.

Grandstand Matches start at 12:00 noon and there can be up to 5 matches played. We saw Venus Williams play here. There are no separate Day or Night sessions. One ticket is good for the day. Grandstand reserved tickets are located on rows 18 and below. Anything higher than that is general admission, which you can access with a Ground Pass (see below). 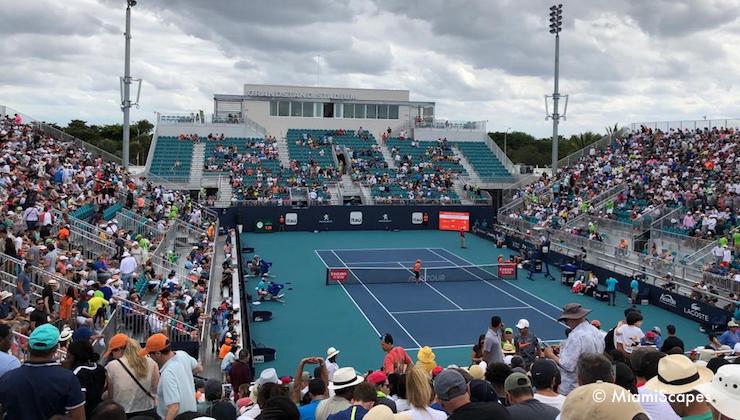 Matches on the Competition Courts take place throughout the day, any ticket will give you access to these matches, Stadium Court ticket, Grandstand ticket or a Ground Pass. There are 8 additional competition courts although not all are used at the same time, matches start at 11:00 am. There are typically about 5 - 6 matches at each court.

Tickets for Stadium Court and Grandstand matches are Reserved Seating and also give you access to the entire tennis campus, the competition and practice courts, food and beverage venues, etc.

Ground Passes give you access to the tennis campus including all competition courts and practice courts, the general admission section of the Grandstand (rows 19 and above), all food and beverage venues and of course the gigantic video board. Ground passes can be purchased for as low as $15. You can buy Ground Passes for the Day which give you access at 11:00 am until closing.

How to see your favorite top player with a Ground Pass? Check out the Practice Schedules when they are posted and see when they will be playing and where! There are 18 practice courts, Courts 26 and 27, closer to the West Lawn is where Roger Federer, Novak Djokovic, and Sloane Stephens were practicing when we were there. 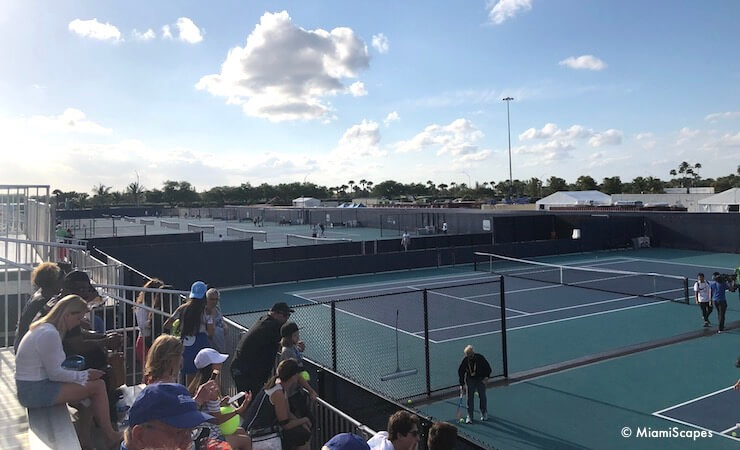 As the end of the tournament approaches, sessions are reduced and starting times are later, typically 1:00 pm for the Day Session, Ground Passes will also start at this time so be sure to check the schedule for the day of your visit. 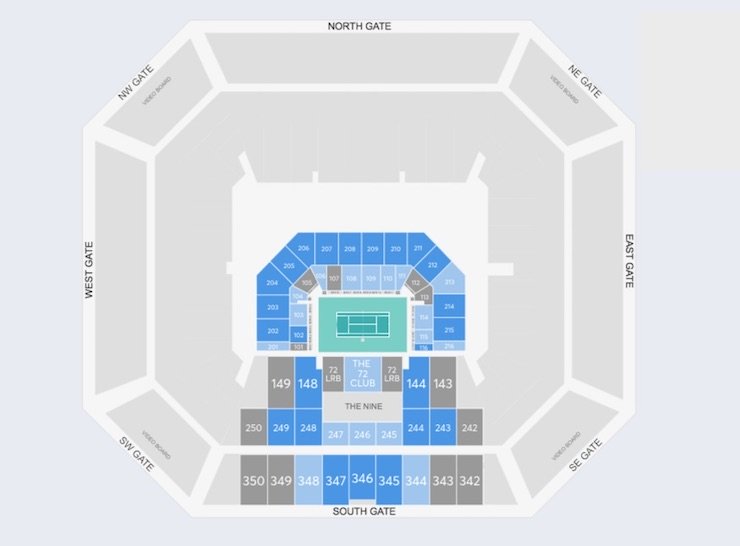 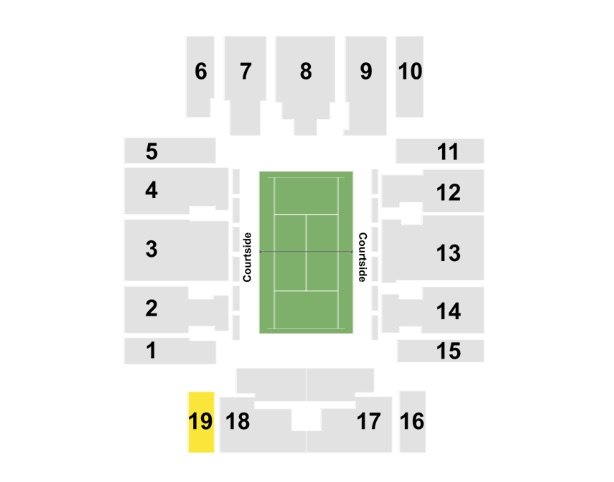 Hard Rock Stadium: Getting There, Parking

If you are driving from South Beach or Miami Beach, it will take you anywhere between 30 - 45 minutes depending on the traffic, even though it is only an 18-mile ride, this is in the midst of Spring Break, traffic will be heavy around South Beach and Miami Beach, and as you approach the Stadium and parking areas.

Parking at Hard Rock Stadium is plentiful and directly next to the tennis complex.

Pre-paid Orange Lot parking is $25 per day. To purchase parking for a single session or day of the tournament, visit Ticketmaster. Same-day parking in Orange Lots 15-18 can be purchased with a credit card for $40 or SunPass for $35.

Here's more info on Hard Rock Stadium: Directions, Parking, Uber/Lyft Taxis. Note that the Public Transportation and Express Shuttle Info applies to Miami Dolphin games only, no options have been announced for the Miami Open.

Tips for Attending the Tournament

Comfortable clothing and sun protection are a must. Even though with the new facilities there are plenty of airconditioned areas, the tournament is played outside, be prepared. Even in March, mid-day temperatures in Miami can soar in the high 80's. Bring sunglasses, large hats and sunscreen to protect from the sun.

To avoid the heat, try the evening sessions which are quite pleasant and with a lively atmosphere.

You are allowed to bring one sealed 1L bottle of water, if you buy inside they are $5

Food is allowed in a small clear bag for guests with approved dietary or medical exceptions.

Where to Stay for the Miami Open?

Hard Rock Stadium is not in a "hot" neighborhood by any means, it is located north of Downtown Miami in Miami Gardens but it is conveniently situated next to several major freeways which makes it easy to get there from just about anywhere in Miami and Broward County.

This is a very busy time of the year in Miami with Spring Break and hundreds of events all happening alongside Miami Music Week, the Winter Music Conference and ULTRA, you should make your bookings as soon as possible. There are many areas to choose from depending on what your plans are.